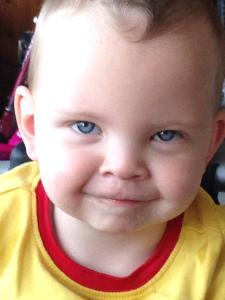 Our son Cooper was born in April of 2012. Within a few days Cooper began having seizures. I was frantic wondering if my son would be okay. My husband became a pillar of strength. I could see the fear in his eyes, but he was the strong one. Cooper was diagnosed with the five day fits. I was amazed at the doctor. I just could not believe this was it. That they would say this was not important.

Since those first days Cooper has had multiple ear infections resulting in tubes in his ears (twice!), feeding programs, motility studies for digestion and a number o EEGS. We saw genetics and they offered Exome sequencing sure that Cooper had a genetic syndrome. However it was so costly we struggled with how to proceed. Luckily we received a call from Genetics that there would be no cost at all for the testing.

Six months later we got the results: PACS1. I didn’t know what it meant but ti was an answer.  We now had people we could lean on for advice.

Now two years old, Cooper will still not eat via his mouth. He is in physical and occupational therapies twice a week. He has begun walking with a gaited walker and recently was prescribed AFO’s (braces) for his ankles.  He was in a 35-day feeding program; however we wonder how effective it will be due to his developmental age versus his actual age.

Cooper, like most PACS1 children, suffers from GI issues. He is on a strict diet and takes supplements to through a GI Button in his stomach.

Cooper is a beautiful boy who loves to snuggle, leans in for kisses and points when you ask where someone is. Like most two year olds, he shakes his head “no” to everything, he does get angry and frustrated. But it is easy to turn his upset into happiness. Without his walker he scotts on his behind and he recently started climbing onto the couch.

We are so proud of his accomplishments. His smile continues to light up the room and his journey is just beginning.

(c) PACS1 Families (2014 through current date). Unauthorized use and/or duplication of this material without express and written permission from this site's author and/or owner is strictly prohibited. Photographs are not to be redistributed with out permission. Excerpts and links may be used, provided that full and clear credit is given to PACS1 Families with appropriate and specific direction to the original content. Please contact PACS1information@gmail.com for permissions

The Parents of Children with PACS1 can be contacted at PACS1information@gmail.com The parents are from all over the globe. Please feel free to ask us any questions in regards to our children's journeys.
%d bloggers like this: